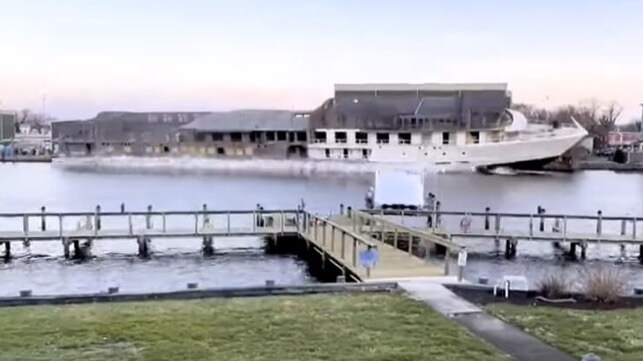 Construction is proceeding on American Cruise Lines’ new generation of modern riverboat cruise ships with the fifth vessel recently launched at Chesapeake Shipbuilding in Salisbury, Maryland. According to the shipbuilder, it was the heaviest ship the company has yet launched into Maryland’s Wicomico River. Despite the early hour of the launch, a small group of spectators gathered to watch the hull of the new cruise ship named American Symphony enter the river for the first time.

“We got to take advantage of the opportunity of a very small window so at 6:30 this morning we took 1,300 tons of steel and launched it into the river,” Steve McGee, President of the Chesapeake Shipbuilding told local TV station WBOC. “American Symphony slid into our outfitting basin and now all trades are able to go back to work and finish erecting the upper decks.”

The hull of the 5,400 gross ton cruise ship measures 269 feet in length with a beam of 59 feet. When completed, the new cruise ship will feature five decks with accommodations for 175 passengers. Immediately after the launch, the new riverboat was positioned in Chesapeake’s East Outfitting Basin where it will receive its upper decks and outfitting. American Symphony is scheduled to begin cruising the Mississippi River in August 2022.

“American Symphony will feature the same sophisticated elegant design and state-of-the-art features showcased aboard 2021 sister ship American Melody,” said American Cruise Lines. The company launched its class of new, larger, and more luxurious riverboats in 2018 having now introduced four of the ships and in addition to American Symphony has a sixth under construction, American Serenade, due to enter service in 2023.

Designed for river cruising, the class introduced an increased use of windows and glass walls to provide river views while also featuring an opening bow and retractable gangway. The vessels also feature a four-story glass atrium topped with a domed skylight. Passenger amenities include a restaurant and lounge as well as a sky lounge, cafe, and bow terrace. There are also fitness and yoga rooms and the top deck includes a Skywalk and an ellipse cutout cantilevered over the ship’s deck café below.

Russia’s biggest cargo airline to suspend all Boeing flights By