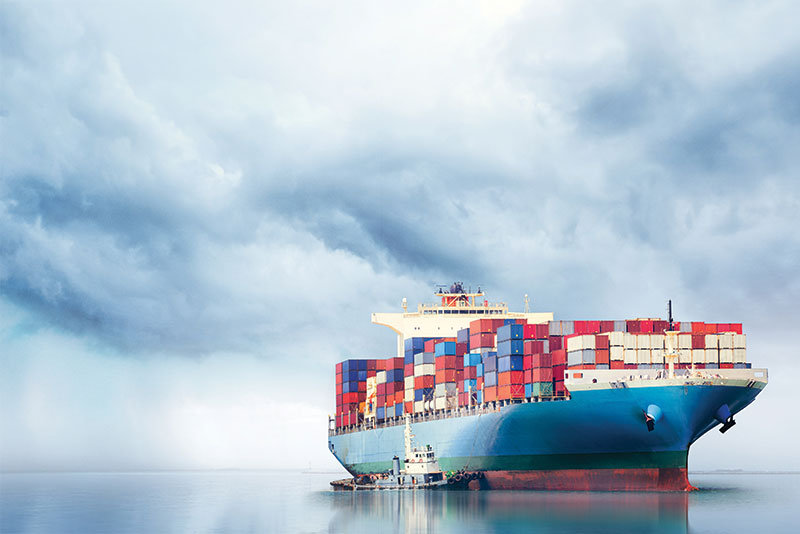 This is a time of highly disrupted supply chains compounded by cascading issues. Yet ocean carriers are riding a high wave of
unprecedented record profits.

Maersk, now the world’s second largest shipping company, reported second quarter 2022 revenues of $21.7 billion, marking a 52% increase compared to the same period of 2021. Net profits were $8.6 billion, a new quarterly record, and $15.4 billion for the first half of the year.

For the first half of 2022, Hapag Lloyd, the world’s fifth biggest container line, reported revenues of $18.6 billion with a net profit of $9.5 billion— more than three times a year earlier.

“All container carriers are seeing high profits,” said Nils Haupt, Hapag-Lloyd spokesman. “Due to low capacity and high demand, all carriers have seen rates going up pretty much since the second half of 2020. Heavy congestions at ports lead to capacity reduction at Hapag-Lloyd of about 20%. This of course leads to higher rates due to much less capacity.”

Based on the current business performance, Hapag-Lloyd officials believe the second half of 2022 will exceed previous expectations. In Germany, Hapag Lloyd is now regarded comparably to Volkswagen in terms of corporate profitability.

“Liner carriers have never made so much money,” says Stefan Verberckmoes, an analyst at ocean cargo database provider Alphaliner.

Drewry Supply Chain Advisors forecasts ocean carriers will make $270 billion in profits in 2022. That’s $70 billion more than what they amassed in 2021, and more than five times what they made in 2020. Drewry also sees the industry’s profits declining to about $150 billion in 2023 as supply chain bottlenecks unwind and freight rates fall. Much of that profit comes from the high prices—many hitting records—carriers have been charging for containers. Simply put, it’s the result of supply and demand, which has not traditionally been the case for the ocean shipping industry.

“Historically, the carriers have always operated with enough ships,” says Verberckmoes. “But with the pandemic, the industry faced its first shortage.”

The industry is still caught in the wake of the pandemic and the subsequent string of unprecedented events: a sudden shortage of ships; port congestion exacerbated by China’s zero-COVID policy lockdowns; labor shortages and union disputes at terminals; and inland transportation bottlenecks. By Drewry estimates, these disruptions removed about 10% of ocean capacity from the market, which escalated container shortages and high container rates.

In response, some carriers placed large orders for containers. For example, in April 2021 Hapag-Lloyd ordered 150,000 TEUs of new dry and reefer boxes plus 8,000 TEUs of special containers. At a cost of $550 million, it was the company’s largest investment ever in boxes.

But now there’s an oversupply of containers. Drewry recently reported that while the global pool of shipping containers increased by 13% to almost 50 million TEUs in 2021, the industry now has a global surplus of 6 million TEUs.

“We always knew that extreme freight rates and profits were unsustainable,” says Philip Damas, managing director, Drewry Supply Chain Advisors. “The only question was when will the market turn, and then, how quickly will it normalize? We still believe that the winding down of high rates and carrier profits will take some time.”

Meanwhile, carriers are looking for investments. With hundreds of billions of windfall profits, carriers have paid back debts, bought thousands of new containers, ordered dozens of new ships, acquired port terminals (i.e., CMA CGM’s acquisition of 90% of the Fenix Marine Services terminal in Los Angeles), and have invested in air cargo and logistics businesses.

Carriers worldwide have also been on a buying spree to add ships to their fleets. None has been more aggressive than MSC. In early January, its vessel acquisition policy resulted in its overtaking Maersk as the world’s largest container shipping company, thereby ending Maersk’s 25-year reign at the top.

MSC’s appetite for second-hand ships has been described as “insatiable.” Maersk had achieved the No. 1 position through acquisitions: Sealand in 1999; P&O Nedlloyd in 2005; and Hamburg Süd in 2017. “Today MSC and Maersk have two different strategies,” says Verberckmoes. “Maersk is investing more in logistics with a goal to become a logistics integrator in containers like UPS and DHL are integrators for parcels.”

Other liners with a notable number of ships on order are CMA CGM, which is adding 68 ships (641,489 TEUs) and Evergreen Line, which is adding 55 ships (539,340 TEUs). “Evergreen has overtaken ONE because of their new program for huge modern ships,” Verberckmoes says.

Hapag-Lloyd has doubled its container ship order by ordering six mega-vessels with a capacity of more than 23,500 TEUs. Delivery is expected in December 2023. With so many ships on the orderbooks, 2024 will see a serious influx of new tonnage. “It’s very unlikely there will be enough cargo to fill all of these ships,” Verberckmoes observes.

Meanwhile, smaller, non-alliance carriers such as Matson and Zim in the trans-Pacific trade, and new entrants like BAL and Sea Lead Shipping, are creating what Drewry sees as being “a fillip of competition” to the very large alliance ocean carriers who control 70%+ of the total ocean shipping capacity on the East-West routes.

In March, for example, Sea Lead launched a new service connecting East Asia to four strategic ports on the U.S. East Coast. “But the smaller regional carriers are not making a big impact on overall major routes other than providing exporters and importers some alternative options when capacity is very tight—and sometimes a higher level of service,” Damas says. “They play a big role in intra-regional markets like intra-Asia,
not the major East-West routes.”

Given looming changes in supply and demand whereby container lines may face excessive capacity, the next big issue will be cargo visibility.

Many are questioning what impact the Ocean Shipping Reform Act of 2022 will have on ocean carriers. In short, analysts say: “Not much.”

The Act essentially revises requirements governing ocean shipping to increase the authority of the Federal Maritime Commission (FMC) to promote the growth and development of U.S. exports through an ocean transportation system that’s competitive, efficient, and economical.

For example, the bill requires the FMC to investigate complaints about detention and demurrage charges (i.e., late fees) charged by common ocean carriers, determine whether those charges are reasonable, and order
refunds for unreasonable charges.

The Act does reinforce FMC oversight powers. Carriers will have to revise their detention and demurrage tariffs and practices to ensure shippers have sufficient time and ample opportunities to act before they must pay the late fees.

Currently, however, environmental regulations, specifically IMO 2023, are prompting containership acquisitions. IMO 2023 requires that carriers reduce their carbon emissions by 40% by 2030 and by 70% by 2050.

The regulations are challenging container lines because there are only three options: low sulfur fuel; alternate fuel such as LNG; or the installation of Exhaust Gas Cleaning Systems (EGCS), or “scrubbers.” Low sulfur fuel is significantly more expensive than high sulfur fuel. High oil prices, the result of the Russian invasion of Ukraine, has particularly made ships installed with scrubbers less costly to operate.

Frankie Mossman, chief customer officer at supply chain visibility and risk management software company Overhaul explains: “IMO 2023 regulatory initiatives for driving carbon compliance will require all vessels to be assessed by their efficiency, carbon index, and ship energy efficiency management plan. Based on the age of the fleet and these assessments, this could reduce vessel capacity and strain sailing options.”

At the end of 2021, Evergreen had installed scrubbers on 108 ships, or some 50% of its fleet. In May 2022, ONE ordered 10 mega-ships designed to run on methanol and ammonia as part of its $20 billion plan to overhaul its fleet. Last year Maersk announced it was investing $1.4 billion in eight new vessels, each costing $175 million, that can be propelled by methanol. Delivery is expected in 2024.

In 2020, CMA CGM became the world’s first maritime shipping company to choose LNG to power its ultra-large containerships and announced its decision to acquire a new generation of 26 LNG-powered containerships. 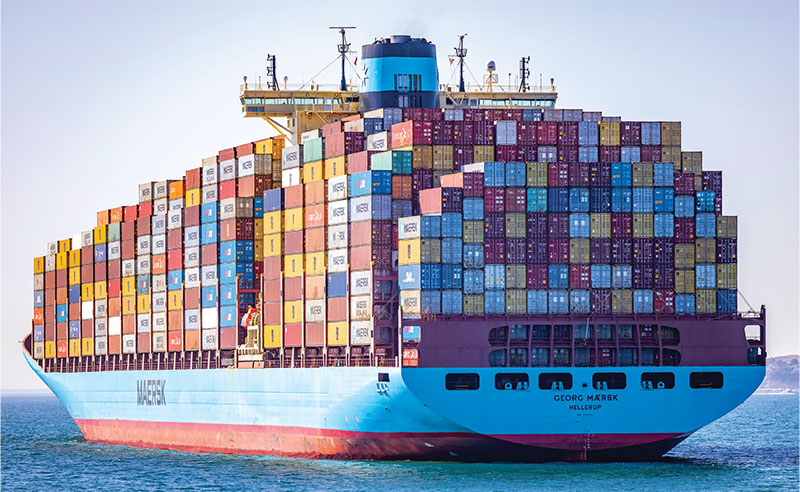 Drewry finds evidence that the industry is trying to decarbonize the majority (54%) of vessel order contracts placed this year for alternative fuel types. Shipping analytics firm Clarksons Research reports that only around 5% of the world’s fleet currently can run on alternative fuels, with some 4% being LNG fueled. It adds that 40% of new ship orders have that option. However, the cheapest solution to decreasing emissions is to drastically reduce transport speeds.

But this also creates a need to transport 5% to 15% more capacity to make them viable. “There is a large difference between 5% and 15%,” says Verberckmoes. Plus, mega container ships consume less fuel on a voyage than 16,000 TEU vessels, thereby saving money. “This is why so many new and large ships are being delivered,” he adds. “They won’t have to face speed reductions and offer huge capacity.”

Given that most ships typically are commission for 25 years, and ships need to be carbon free by 2050, the time to go fuel-free is now. “Apart from heavy and low-sulphur fuel oil, and to some extent LNG, there’s currently still nothing available on a worldwide scale yet,” Verberckmoes says.

Damas adds that many companies are just starting to look at decarbonization and sustainability strategies for their transportation activities. “This will become an area of much stronger focus over the next 12 months,” he says.

The 49th Chief of the Supply Corps Visits NAVSUP Fleet

Cost of shipping fireworks goes up, families still looking to