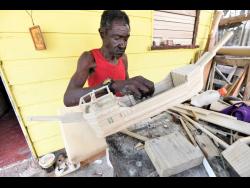 Sixty-seven-year-old Alvin Lewis is a skilled artisan who makes his living creating and selling miniature ships and other water-craft items.

Lewis told THE STAR that he was introduced to the world of miniature ship-building by an employer at a car wash garage in Kingston.

“Mi used to wash him car and one morning when mi a clean him car, mi see him wid a ship weh look like dis. Mi say to him, ‘Mr Morris, yuh know I would like to build one of these so that I can live off it’. He said, ‘Of course’, and him teach mi how fi build it. From that a it me live off. Mi no have any more source a income,” he said.

Lewis spends his days carving, bending and creating eye-catching pieces, which he then sells to passers-by across the Corporate Area. He is mainly located along Lady Musgrave Road and along Spanish Town Road, in the vicinity of the entrance to Seaview Gardens.

He said that as early as 5:30 a.m., he is out in the streets displaying his work, which he said often catches the attention of motorists and pedestrians.

“Me remember one mawnin mi deh pon a stop light and a motorist drive pass mi, but him see mi work and reverse same time. When him reach weh mi deh him ask mi how much is for the ship, mi tell him $5,000 and a same time him gi me di money and drive off,” he said.

Reid said he is encouraged by the reception he gets from the public and is hoping that one day he will get the opportunity to showcase his talents on a grander scale.

“From mi a build dem things here mi never sell a tourist man. Mi never go Ochi and dem place deh yet fi sell one a mi products to dem. Yuh see dis?! It tek mi two days fi build. Yuh notice how it neat and mi no finish it yet. Yuh a guh see when mi polish it and shine it down.

“Mi glad fi mi work, a it mek mi a live a comfortable life weh mi no short of food and dem likkle something deh. (But) mi wah go further man…I would love someone fi get somewhere a Ochi Rios and mi nice cause me a di only man weh build dem things here a Kingston. Jamaica and everybody love it,” Lewis said.

State funds to be used to demolish old airport cargo

Walmart in a World on Fire