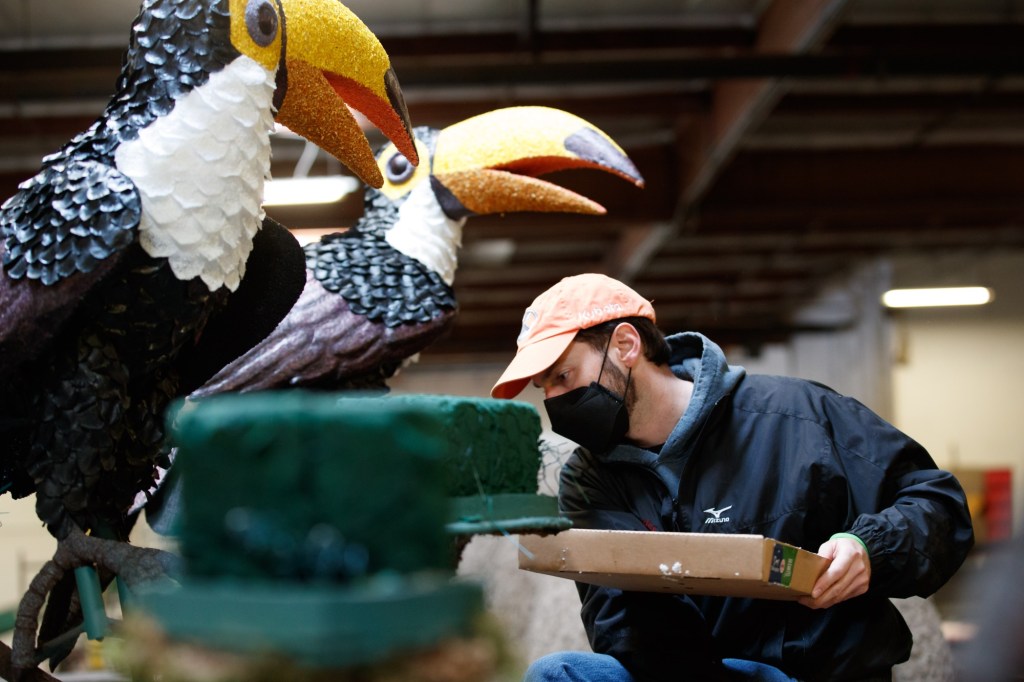 Pasadena’s Rose Parade is three days away, but shipping snarls and supply shortages have flower suppliers and float builders scrambling to the finish line to complete the larger-than-life floats that will file down Colorado Boulevard on New Year’s Day.

Pandemic-era supply-line issues that have affected the price and timely delivery of everyday goods have put a thorn in the sides of executives with companies that construct parade floats and provide  the flowers and other natural items that cover them.

Between them, CEO Tim Estes of float-builder Fiesta Parade Floats, and Bob Mellano, vice president of Mellano & Company, which provides tons of flowers for those floats, are involved with nearly half of this year’s petal-bedecked wonders. Together, Estes and Mellano have more than seven decades of combined experience with the Rose Parade.

Both say shipping issues and labor shortages have complicated their efforts this year, as the parade returns after a year off because of the coronavirus outbreak.

“My first memories of the business was bringing flowers – statice, foliage and so on and so forth – to Fiesta when I was a little boy,” Mellano said in an interview this week, detailing how his grandfather immigrated from Italy in the early 1920s and soon found himself working with one of the country’s most prestigious parades.

“We go back three generations as a flower grower and we’ve always produced for the Rose Parade,” Mellano said Tuesday, standing in a pile of tropical flowers that arrived from Costa Rica 48 hours later than expected. “It’s just that things have changed dramatically over the years.”

In Irwindale, where crews hurriedly hand-placed florals supplied by Mellano, Estes explained that he has experienced similar difficulties in preparing for this year’s spectacle.

Float construction isn’t a simple business. “It takes approximately 7,000 hours to decorate one float from start to finish,” Estes said.

After designs are complete, the preparation work starts the second weekend in November and continues well into December when volunteers will work until approximately 11 p.m. every night up until the big day.

This year, Mellano and his staff arrive as early as 3 a.m. to begin a shift. “It’s necessary because it takes a lot of people hours, and that will never change,” Estes said. “What has, though, is what COVID has done to the economy and the availability of material.”

Like so many businesses, the pandemic took its toll on the parade business. Estes said he was forced to lay off his staff last March after losing 96% of his annual income following last year’s parade cancellation.

Fortunately for organizations such as Kaiser Permanente and Donate Life — which both hired Fiesta Parade Floats to build their floats for the 2022 Rose Parade — the company weathered the storm.

The problem now, according to Mellano, “is COVID is causing a logistical nightmare.”

Mellano & Company is responsible for sourcing 665,000 stems from seven states and 15 countries, including Thailand, Singapore and many in South America.

“It used to be a very local ordeal,” Mellano said, but floral supplies are now international, like so much of today’s freight industry.

The result of the boom, particularly during the enduring coronavirus outbreak, Estes said, “is that the cost of transportation has gone up, the cost of fuel has gone up — so pretty much the flowers are going to be costing about 40-45% more this year than two years ago.”

That’s a huge economic impact that’s multiplied by the increasing cost of steel, wood, paint and other raw materials, according to Estes.

“But the biggest challenge right now is and has been getting the doggone flowers here in any type of timely fashion,” Mellano said. “We had a shipment of roses that was supposed to depart Ecuador on Friday this past week, and the flights were canceled.”

And because all of the roses didn’t make it out on a subsequent flight a few days later, Mellano explained he and his staff are still trying to scramble to figure out how they’re going to get the rest of the roses to Pasadena.

To cut down on costs, it’s been suggested that Estes and other designers use paint instead of natural items, or simply choose to not decorate every square inch of a float.

“But again, I’ve been around the Rose Parade since I was 8 years old and I know the Rose Parade as this grand floral event, you know? There’s no other event like it in the United States,” Estes said, declaring he’d rather not see a profit than lessen the prestige of the Rose Parade.

Victoria Boyd, 77, of St. Louis, Mo., decorates a dove that will be placed on the Donate Life float at Fiesta Parade Floats in Irwindale, Calf., ahead of the 2022 Rose Parade on Monday, Dec. 27, 2021. (Photo by Trevor Stamp, Contributing Photographer)

“And it’s not only me, but my entire crew,” he said. “We have that dedication and believe floats are the earmarks of what the Rose Parade is all about.”

Thankfully, the two businessmen aren’t alone. They’ve built a broad network of assistants to call on when they find themselves in a bind.

Mellano acknowledged he’s so willing to complete an order that he has no shame heading to competitors to find the flowers he needs.

Estes, meanwhile, relies on volunteers to make sure the handmade honeybee hives, dragons and other designs are as vibrant as ever.

“It’s a business but it’s also a labor of love,” Mellano said. “The pressure for me is the fact that they’re counting on us and without us the floats are going to go down with no flowers. And we can’t let them down.”