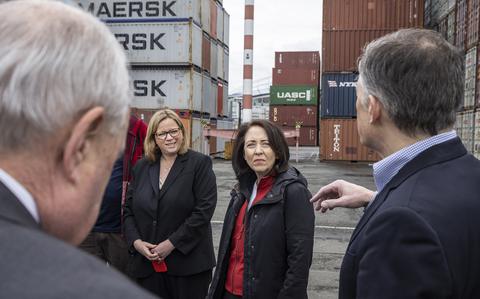 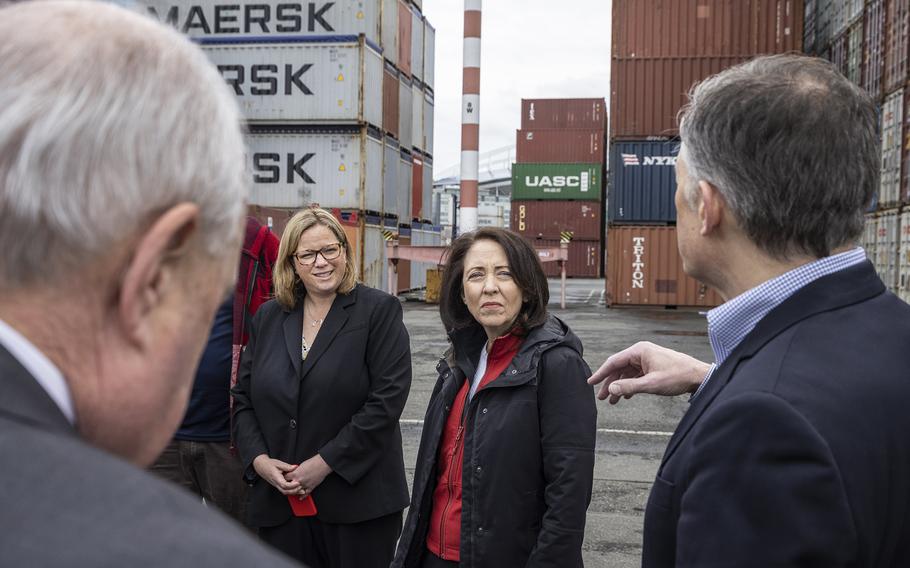 Senator Maria Cantwell and USDA Under Secretary for Marketing and Regulatory Programs Jenny Lester Moffitt at left listen during a tour of Seattle’s Northwest Seaport Alliance’s Terminal 46 where over 7,000 containers sit ready to be picked up and filled or filled and waiting to be loaded onto ships. (Steve Ringman/The Seattle Times)

(Tribune News Story) — As “pop-ups” go, the one coming to the Port of Seattle is pure pandemic.

The U.S. Department of Agriculture will soon be offering $200 to $400 bounties for containers packed with agricultural goods delivered to a 49-acre pop-up site near the Seattle shipping terminals.

The pop-up site is a small part of the response to what has become a sprawling, pandemic-driven problem. Shipping containers are in demand by Asian manufactures looking to ship to product-hungry Americans, so much so that they’re being shipped back to Asia empty. American farmers, meanwhile, can’t get container space they need to reach Asian markets.

“When these containers leave our ports without product, we’re basically put in a position where we cannot meet the export demand for our products that is out there,” said Secretary of Agriculture Tom Vilsack in an interview Thursday. “It jeopardized our ability to maintain market share in Asian markets.”

The payments are meant to help food producers offset shipping costs, which have skyrocketed over the past year, while creating physical space to store agricultural products that are ready to ship. Shipping snarls have made it difficult for farmers to time deliveries so their products go onto a ship without spending days or weeks in storage lots, where they face considerable fees.

At the same time, leaders in Washington, D.C., are looking for new ways to pressure the six shipping companies that dominate that industry, which have been described to one Washington state congresswoman as a “cartel.”

Between them, the ports in Seattle and Tacoma are the fourth-largest container gateway in the United States. They, like Oakland and other Pacific Coast ports, have also become a pinch point for agricultural products destined for China, Japan, Korea and Southeast Asia.

The Northwest Seaport Alliance — the umbrella organization for the Seattle and Tacoma ports — saw a nearly 30% decline of agricultural exports during the last six months of 2021, when fraying global supply chains essentially snapped. Most containers leaving Seattle have been empty since May 2021.

While most of the agricultural goods flowing through Washington’s ports come from other states, agricultural exports are big business for Washington farmers and seafood producers.

In 2020, Washington sent $1.1 billion in food products grown or processed in the state to Japan, according to the state Department of Agriculture. Another $518 million in goods went to China, with $459 million going to South Korea and $343 to the Philippines. Seafood products remain Washington’s top agricultural export, topping $1 billion in 2020, when frozen french fries were a close second at $784 million.

“As the Washington growing season ramps up over the next few weeks, this new pop-up port will fill up with containers of hay, grains, peas, lentils, refrigerated dairy products, all ready to load onto ships and reach consumers across the globe,” said U.S. Sen. Maria Cantwell, D-Washington.

Shipping snarls notwithstanding, U.S. farmers had a banner year in 2021 in terms of revenues. Net farm income, buoyed by $27.2 billion in government support, hit an all time high at $117 billion, according to the U.S. Farm Bureau.

“That is based on continuing the relationships we’ve developed in Asian countries,” Vilsack said. “You can’t do that if you can’t get product to market on a timely basis, so it’s important to get those containers filed.”

Agricultural sector costs also ballooned in 2021, with some fertilizer products doubling in price from their pre-pandemic levels. Trucking, farm labor and marine shipping costs have jumped considerably. Even seed prices are up.

While some of those price increases may be justifiable, Vilsack said more must be done to make sure farmers and consumers aren’t being gouged. He highlighted a recent effort by Iowa Attorney General Tom Miller to investigate a sharp uptick in fertilizer prices as a useful step, and suggested Congress should investigate and, if necessary, legislate to protect agricultural producers and American consumers.

“We always need to have some degree of skepticism whenever we’re faced with dramatically rising costs, on whether or not folks are taking some advantage of the current circumstance,” Vilsack said.

The initiative by USDA and the Seaport Alliance will open space near Terminal 46, located west of Lumen Field. USDA’s Farm Service Agency will pay agricultural companies and cooperatives that preposition containers filled with American-grown commodities $200 per dry container and $400 per refrigerated container to offset costs.

The pop-up site comes after the Seaport Alliance and others opened an additional 60 acres of container storage space to reduce port congestion, said Deanna Keller, a managing member of the alliance and Port of Tacoma Commission vice president. The new Seattle effort follows similar moves at the ports in Oakland and Savannah, Georgia earlier in the year.

At the same time, Vilsack said, shipping companies may be taking advantage of the pandemic pinch. Rep. Schrier said hay farmers in her district, which stretches from Auburn to Lake Chelan, describe the shipping companies as akin to “a cartel.”

“They charge exorbitant fees, they know they can get away with it because there’s so little competition,” said Schrier, who backs the Ocean Shipping Reform Act, which would strengthen the federal regulator tasked with overseeing that industry. The bill is currently in the Senate.