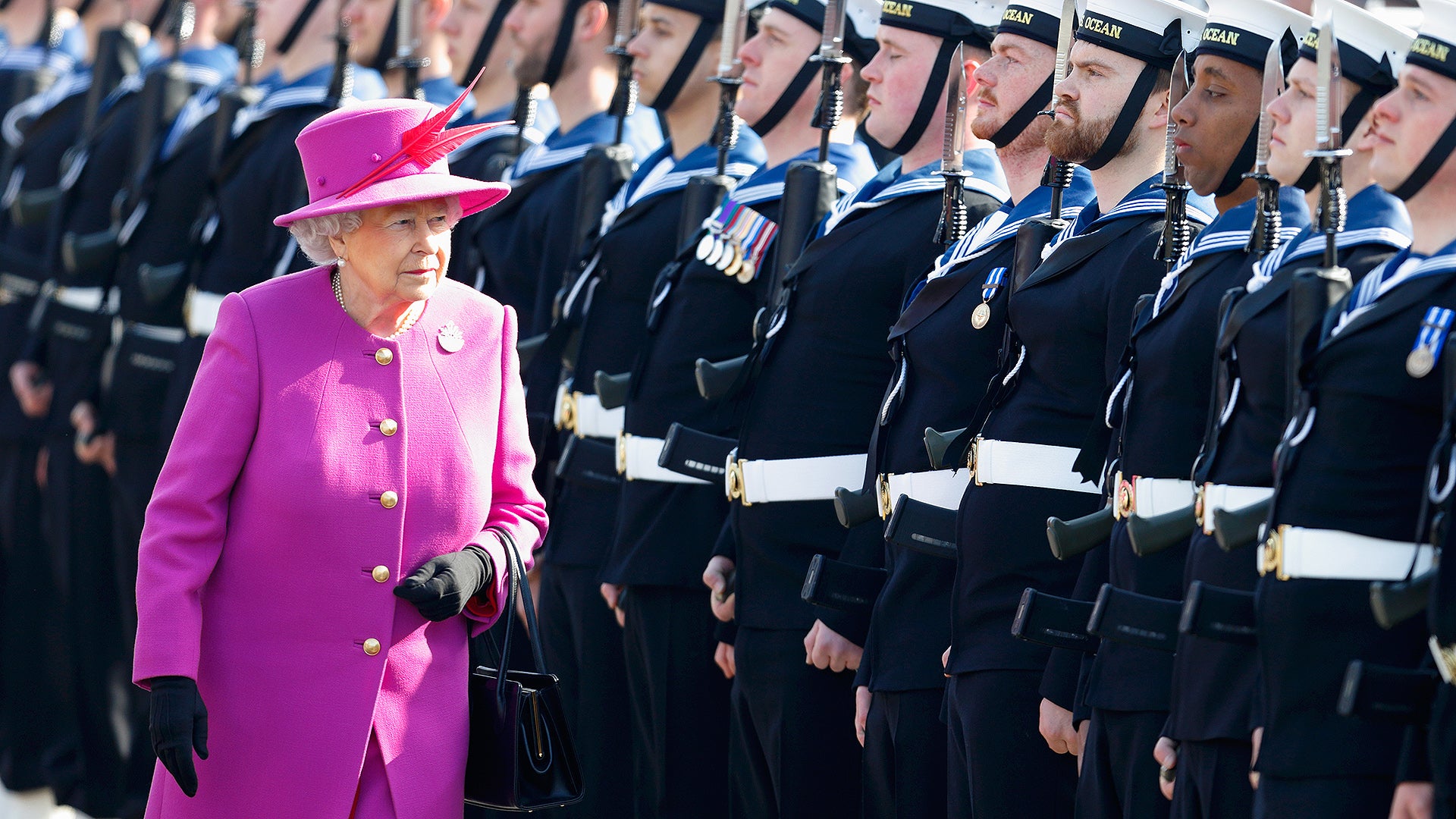 The death of Queen Elizabeth II, the only ruling monarch most of her subjects have ever known, kicks off a solemn spectacle of remembrance and celebration unlike that for any other world leader, ultimately leading to her funeral and the crowning of now-King Charles III. All this will occur in accordance with meticulously laid out plans, including a massive logistical ‘dance,’ that have been in place for many years.

Because Elizabeth, who was 96, died at her beloved Balmoral Castle in Scotland, two sets of these long-established plans were immediately put into action.

Shortly before she died, Queen Elizabeth greeted the newly elected leader of the Conservative party Liz Truss as she arrives at Balmoral Castle for an audience where she will be invited to become Prime Minister and form a new government on September 6, 2022 in Aberdeen, Scotland. (Photo by Jane Barlow – WPA Pool/Getty Images)

One, called Operation Unicorn, was designed for what would happen had she died north of the English border.

The other, is called Operation London Bridge, the main plan for the Queen’s death, which will run in parallel with Operation Unicorn because she died in Scotland.

Both would be followed by Operation Spring Tide – the coronation of King Charles III.

Here’s what we know about these plans so far.

The erstwhile ‘secret’ Operation Unicorn “states that on hearing the news, parliamentary business would immediately be suspended to allow authorities to prepare for the Queen’s state funeral,” according to The Scotsman newspaper.

Hundreds of thousands of people are expected to make their way to Scotland to pay their respects and “would be encouraged to gather around the Scottish Parliament, the Palace of Holyrood House and St Giles’ Cathedral – all on Edinburgh’s Royal Mile.”

The Queen’s body “will be conveyed from Aberdeen to Edinburgh on a special train, with members of the Armed Forces and the emergency services lining every platform on the way.”

Because the train will be traveling well below normal speed, “security will be ultra-tight with air, land and sea covered by the military. Temporary fire and police stations will be set up at the Palace of Holyroodhouse with a strong armed police presence, backed by the military.”

After arrival in Edinburgh, the Queen’s body “would initially rest in state at the Palace of Holyroodhouse, before her coffin is carried to St Giles’ Cathedral. At the cathedral, Scotland’s senior civic leaders, dignitaries and members of the public will have the opportunity to pay their respects and sign a book of condolence.”

The Queen’s coffin “would then be placed on a Royal Train at Waverley Station” before making the trip “down the East Coast Mainline to London. Operation Unicorn ends when her Majesty leaves Scotland for the last time, again with an honor guard formed on every platform from Edinburgh southward.”

The Royal Train, carrying Britain’s Queen Elizabeth II and Meghan, Duchess of Sussex, arrived at Runcorn Station in Runcorn during their visit to Cheshire on June 14, 2018. (Photo credit should read PETER BYRNE/AFP via Getty Images)

But just as Operation Unicorn was likely activated, a process that was planned to let the world know of the sad news was also put into motion.

The death of the Queen sparks an announcement that goes “out as a newsflash to the Press Association and the rest of the world’s media simultaneously,” The Guardian newspaper reported in a long 2017 profile about this eventuality.

“At the same instant, a footman in mourning clothes will emerge from a door at Buckingham Palace, cross the dull pink gravel and pin a black-edged notice to the gates. While he does this, the palace website will be transformed into a sombre, single page, showing the same text on a dark background.”

After the prime minister was informed, civil servants were instructed to “say ‘London Bridge is down’ on secure lines.”

“Screens will glow. There will be tweets. At the BBC, the ‘radio alert transmission system’ (Rats), will be activated – a cold war-era alarm designed to withstand an attack on the nation’s infrastructure. Rats, which is also sometimes referred to as “royal about to snuff it”, is a near mythical part of the intricate architecture of ritual and rehearsals for the death of major royal personalities that the BBC has maintained since the 1930s.”

Last year, Politico published details it obtained about Operation London Bridge, which outlines a 10-day period of events between the Queen’s death that displays the “extraordinary level of action required by all arms of the British state, including a vast security operation to manage unprecedented crowds and travel chaos that could see, in the words of one official memo, London become ‘full’ for the first time ever.”

​​In the hours after the Queen’s death, “a ‘call cascade’ will take place informing the prime minister, the cabinet secretary (Britain’s highest-ranking civil servant) and a number of the most senior ministers and officials. The PM will be informed by the Queen’s private secretary, who will also tell the Privy Council Office, which coordinates government work on behalf of the monarch.”

Some of the immediate plans relate to social media.

The Royal Family’s website changed to a black holding page with a short statement confirming the Queen’s death.  And, as with all other government sites, both the website and Twitter account of the U.K. Defense Ministry displayed a message about the Queen.

Truss said the country was “devastated” by the death of Queen Elizabeth II, calling her “the rock on which modern Britain was built.”

Truss went on to say that the news is “a huge shock to the nation and to the world” but that the Queen’s spirit will endure.

“We are now a modern, thriving, dynamic nation,” Truss said. “Through thick and thin, Queen Elizabeth II provided us with the stability and the strength that we needed.”

“She was the very spirit of Great Britain – and that spirit will endure,” ending on words no British leader has said for 70 years: “God save the king.”

The new Prime Minister was appointed by the Queen just two days ago, becoming the 15th prime minister to serve during Elizabeth’s reign.

Operation London Bridge calls for the Prime Minister and his Cabinet “to meet the Queen’s coffin at St. Pancras station, and for the new King Charles to embark on a tour of the U.K. in the days before the funeral.”

The details of the schedule “range from the banal to the ridiculous,” according to Politico.

On the military side of things, the Defense Ministry “will arrange for gun salutes to take place at all saluting stations,” Politico reported. “A national minute’s silence will be announced.”

The Prime Minister will then hold an audience with the new King, and at some point, King Charles III will deliver a broadcast to the nation.

Then-Prince Charles, now the King of England (wearing the uniform of Colonel of the Welsh Guards) and Queen Elizabeth II watch a flypast from the balcony of Buckingham Palace during Trooping the Colour on June 2, 2022 in London, England. (Photo by Max Mumby/Indigo/Getty Images)

As of yet, no date has been set for Charles’ coronation, AP reported. He took the name King Charles III shortly after the Queen’s death.

With Charles now King, British warships will still bear the HMS before the name, but will now be referred to as “His Majesty’s Ship.”

In 2017, Queen Elizabeth was present for the commissioning of the HMS Queen Elizabeth, the Royal Navy’s new aircraft carrier and the flagship of the fleet that proudly wears her name.

As king, Charles III will assume the role of Commander-In-Chief of the British Armed Forces. He will delegate the authority to issue orders and give commands to military personnel to the Prime Minister and Defense Minister, who in turn delegate their authority to career military officers.

The new King, like his mother, is a military veteran.

“At his own request, the Prince had received flying instruction from the RAF during his second year at Cambridge. In September 1971 after the passing out parade at Cranwell, the Prince embarked on a naval career, following in the footsteps of his father, grandfather and both his great-grandfathers.”

The six-week course at the Royal Naval College, Dartmouth, was followed by service on the guided missile destroyer HMS Norfolk and two frigates.

“The Prince qualified as a helicopter pilot in 1974 before joining 845 Naval Air Squadron, which operated from the Commando carrier HMS Hermes. On 9 February 1976, The Prince took command of the coastal minehunter HMS Bronington for his last nine months in the Navy.”

As noted earlier, the Queen was not just a royal, but also a veteran of World War II, during which she served as an auto mechanic.

Auxiliary Territorial Service: Princess Elizabeth, a 2nd Subaltern in the ATS, wearing overalls and standing in front of an L-plated truck. In the background is a medical lorry. Copyright: © IWM.

When she turned 18 in 1944, “she insisted upon joining the Auxiliary Territorial Service (ATS), the women’s branch of the British Army,” according to the National World War II Museum. “King George made sure that his daughter was not given a special rank in the Army. She started as a second subaltern in the ATS and was later promoted to Junior Commander, the equivalent of Captain.”

She began her training as a mechanic in March 1945. “She undertook a driving and vehicle maintenance course at Aldershot, qualifying on April 14.”

Newspapers at the time dubbed her “Princess Auto Mechanic.”

“The procession will occur when Queen Elizabeth’s coffin is moved from Buckingham Palace to Westminster Hall. Taking place down the Mall, through Horse Guards Parade, and past the Cenotaph, the parade’s route is long enough to fit around a million well-wishers. Apparently, the logistics behind the massive event are based on those used for the London 2012 Olympics.”

Unclear at the moment are the plans for how other British military units, like the Red Arrows aerial demonstration team, will take part in the ensuing events to memorialize Queen Elizabeth. Of course, there are other roles the military will play in the long-held contingency planning, including helping to safeguard these major events.

Regardless, it is guaranteed to be an extraordinary and historic 10 days for Britain as the country and the world celebrate the life of Queen Elizabeth II.

WaveTunnel™ is shipping. Is your enterprise ready for intelligent in-building

Harbor Freight Tools Recalls 478,800 Seats Due To Risk Of