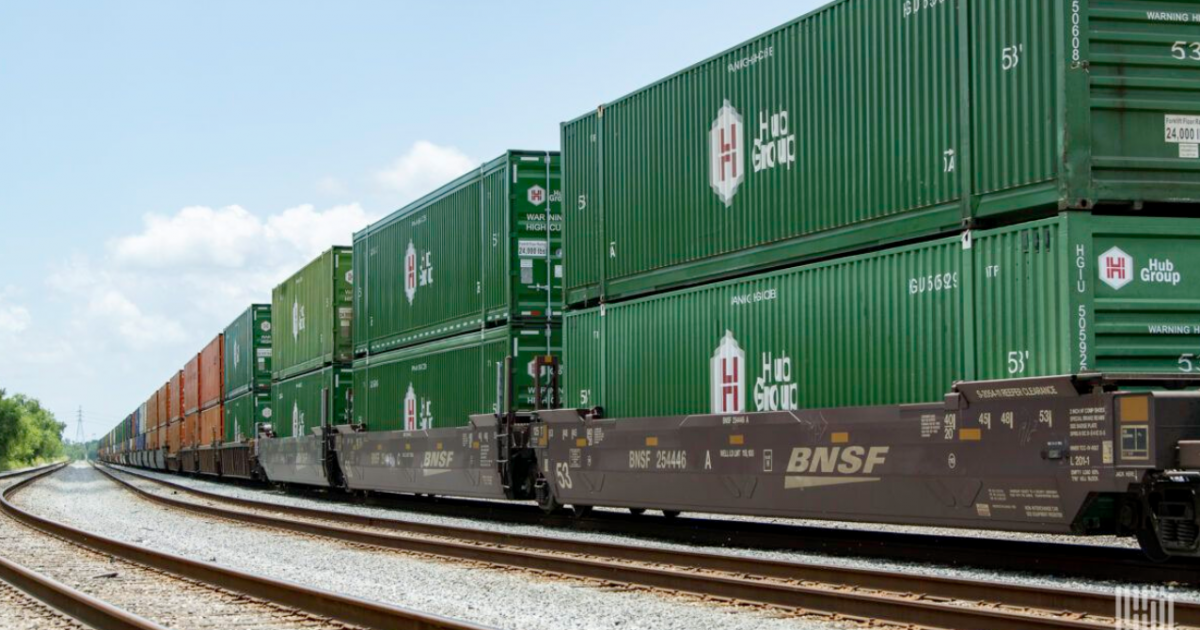 Revenue gains for Hub Group‘s intermodal, logistics and truck brokerage segments, as well its October acquisition of Choptank, helped the company reach record quarterly profit for the fourth quarter of 2021.

That year-over-year jump in EPS, itself a quarterly record for the company, beat analysts’ expectations.

“HUBG blew the doors off Q4, exceeding expectations on the top and bottom line as exceptional freight demand drove pricing strength across the board, despite the congestion in the network,” said Cowen transportation director Jason Seidl. 2022 “guidance came in well above previous forecasts, with earnings expectations [about] even each quarter, exemplifying the balanced lever between the top line and margins.” Hub Group’s adjusted EPS came in above Cowen’s estimate of $1.35 and the consensus figure of $1.43.

Of that, intermodal revenue gew 25% to $702 million amid a 37% increase in revenue per load and despite a 9% decline in volume that was caused by ongoing network fluidity challenges, according to Hub Group.

Logistics revenue rose 13% to $224 million on the growth of Hub Group’s final-mile and consolidation services, the company said.

Truck brokerage revenue increased 112% to $268 million primarily because of the October acquisition of Choptank Transport, a truck brokerage company specializing in refrigerated goods, as well as from growth in revenue per load, Hub Group said. Contractual freight represented 49% of total brokerage volume in the fourth quarter of 2021, compared with 57% the previous year.

But dedicated revenue fell 8% to $62 million on declines from existing customers and the impact of Hub Group’s exit from certain businesses.

Cost and expenses rose nearly 28% to $95 million on the operating costs of Hub Group’s final-mile and Choptank acquisitions as well as higher compensation expenses.

As Hub Group looks at 2022, company executives expect high freight demand, supply chain constraints and continued port congestion to persist throughout the year, all of which are factors that could keep the company’s business brisk. But it also expects costs to increase on the rail side as well as on the third-party drayage side in the form of driver wage increases, and it anticipates a softening in the truck markets sometime this year. Company executives also see rail service improving in 2022, which could in turn create some capacity on Hub Group’s network.

When asked about Union Pacific’s (NYSE: UNP) decision to use Schneider National (NASDAQ: SNDR) as its intermodal carrier for UP’s western business, Yeager replied that he didn’t see a significant competitive change resulting from the decision.

“Hub is the largest intermodal partner on the UP. In fact, we’re twice the size of Schneider Intermodal and five times the size as Knight Intermodal. And we also have 40% more drivers that we have allocated towards intermodal than either of our competitors,” Yeager said during an earnings call with investors late Thursday. “We have a great relationship with the UP, and I think on a very positive note, we have a long-term contract which features benefits that come with that kind of scale.”

He continued, “It’s also on the positive side that UP is gearing up for the additional business by investing $600 million of capital in 2022, targeting specifically chassis as well as terminals. So bottom line is we view [this] to be basically a net neutral for Hub and not a major competitive change.”

Hub Group President and COO Phil Yeager added, “With one of the other providers coming on UP being aligned with the Norfolk Southern, that’ll give us maybe a little bit more density than the two other asset-based providers that are aligned with UP and CSX. So we think with that, we’ll have a better reach, more density, and we’ll have more interline options that will provide a good service.”

Capital expenditures for 2022 are planned to be between $240 million and $270 million. Those capital expenses include an order of 6,550 containers, including 550 refrigerated containers, which will result in a net growth of approximately 6,000 after retirements of containers that have reached end of life, the company said. Hub Group also expects to receive over 750 tractors this year, including deliveries from its 2021 order, to replace older units and support growth in the company’s drayage and dedicated fleets. Approximately $40 million will be spent for information technology investments and for the expansion of Hub Group’s headquarters.

“The refrigerated market continues to add a significant amount of demand. And we’re actually going to be investing in 550 incremental, refrigerated containers this year to help support our selling into that market” and support existing Choptank and Hub Group customers, Phil Yeager said.

Subscribe to FreightWaves’ e-newsletters and get the latest insights on freight right in your inbox.

The preceding article is from one of our external contributors. It does not represent the opinion of Benzinga and has not been edited.

After record year, Greenville-Spartanburg airport cargo expansion to be completed