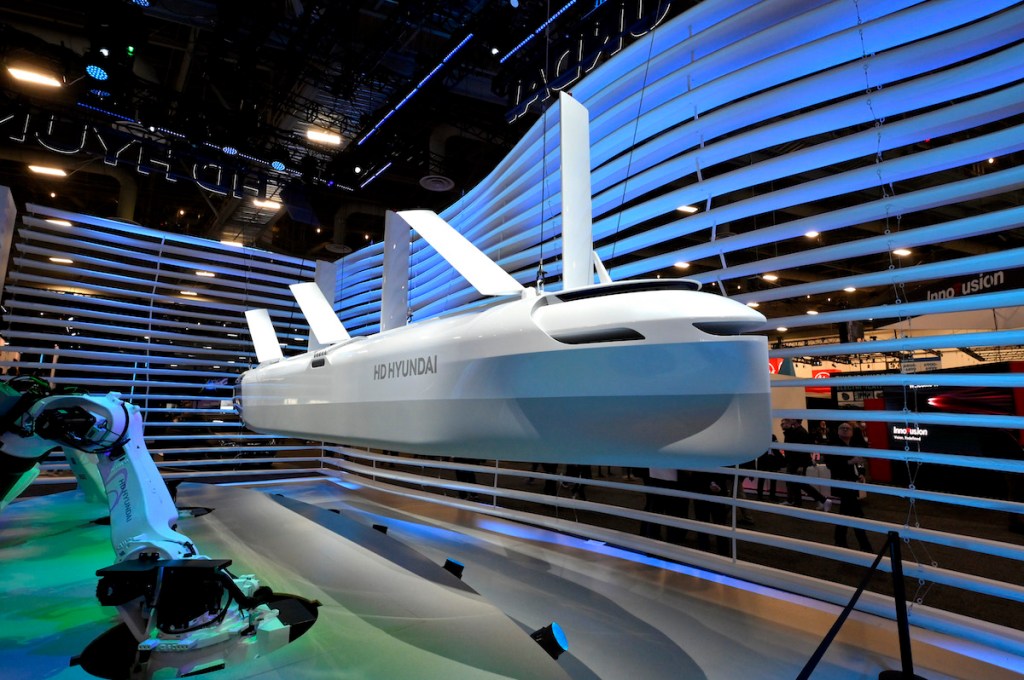 HD Hyundai’s looking to the ocean for its next evolution as it offers CES 2023 attendees a peak at a future that includes electric ships and powerful software to analyze global shipping data.

The South Korea-based shipbuilding and heavy-duty equipment maker, previously known as Hyundai Heavy Industries Group, went big at the Las Vegas technology trade show with a booth totaling over 6,400 square feet. The footprint gives attendees a chance to get up close on new technologies showcasing vessel autonomy and eco-friendly fuel in a strategy the company’s calling Ocean Transformation.

“Our oceans will be the new, blue frontier of our generation,” HD Hyundai president and CEO Kisun Chung told media at CES. “Those vast seas of untapped opportunities…present a whole new world of potential for our future.”

“Ocean’s importance as the channel for some 90 percent of global trade will only increase as ocean shipping is expected to triple by 2050,” Chung said.

The sustainability part of the plan focuses on renewable energy sources, such as hydrogen and ammonia. The two resources will power duel engines, acting as what Sungjoon Kim likened to a “bridge” as the company works toward zero-carbon vessels by 2050. Kim serves as chief technology officer and senior executive vice president at Korea Shipbuilding & Offshore Engineering’s (KSOE) Advanced Research Center. KSOE is a holding company of HD Hyundai.

Kim said the company has delivered “multiple” electric propulsion ships to customers. Those vessels operate off of batteries and generator engines, making them hybrid ships.

KSOE inked a deal in August 2021 to build eight methanol-powered ships for A.P. Moller-Maersk, with the vessels expected to be delivered by 2024. They’re part of the Denmark-based ocean carrier and logistics company’s bid to reach net zero greenhouse gas emissions by 2040.

“But soon, just as cars have then evolved to become fully electric, we’ll be able to use solid oxide fuel cells with hydrogen to power ships much more efficiently and sustainably,” Kim said.

Hyundai is also looking at ship designs, with a focus on how their shapes can help reduce resistance to wind.

On the OceanWise, smart ship front, Hyundai aims to tackle the industry-wide issue of shipping visibility.

“Our ships are getting smarter and greener, but we believe we also need to focus on global sea traffic,” John Baeck, manager at Hyundai Global Service, told media at CES.

He queued up a picture of the congested San Pedro Bay ports to underscore the need for better visibility, citing $24 billion worth of goods that were held up at the two ports in 2021, along with another $31 billion in goods stuck at Los Angeles and Long Beach last year.

Baeck cited limited port infrastructure and visibility as the cause for the congestion issues.

“Real-time information on where ships are, or their status, is hard to get, let alone communicate with the port if there’s a delay,” Baeck said. “Our solution is to aggregate data from as many ships as possible using AI analytics, giving us a more holistic set of maritime data.”

HD Hyundai revealed at CES the latest iteration of its ISS smart ship platform, which originally went into use in 2019.

It aims to lessen ship waiting times to reduce wasted expenses. One ship can burn $90,000 in fuel costs a day, Baeck said.

“With advanced machine learning, we can process and analyze this vast amount of data to gain smarter visibility of the global maritime ecosystem,” Baeck said. “This lets us optimize journeys using AI algorithms and real-time information on what’s happening en route. And, if there is a problem at the port, we can adjust the course, rather than sitting in queue, thereby saving fuel and lowering carbon emissions.”

Technology is also being used for maintenance, offering the ability to predict the need for service and then find the nearest port, while alerting service providers with the necessary information to prepare.

HD Hyundai estimates it can help increase global shipping capacity via its technologies by as much as 10 percent, which is equivalent to 2 million containers. “The goal is to globalize the scope of shipping optimization by connecting all stakeholders in the ecosystem,” Baeck said of OceanWise.

CMA CGM Looks to Route Its Logistics Strategy Through U