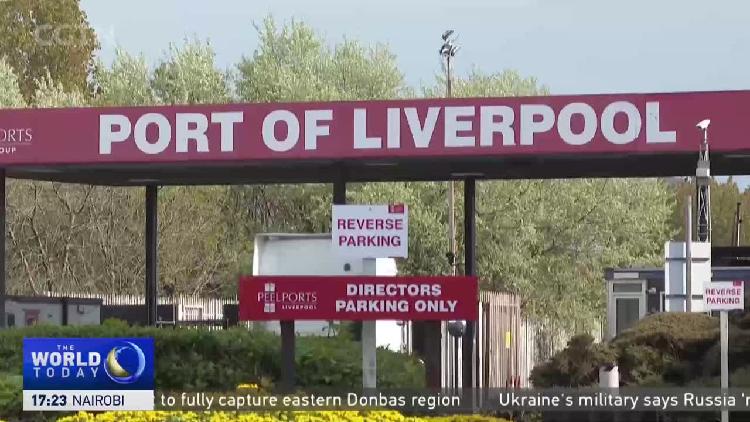 Liverpool has just marked a milestone in its close economic relationship with Shanghai.Chinese and British guests gathered at Liverpool’s port to celebrate the one-year anniversary of the China UK Freight Link… amid plans that would making future shipping ties even stronger.

The direct shipping route between Shanghai and Liverpool has been the icing on the cake of China UK trade cooperation according to China’s ambassador to the UK.

“As the Chinese saying goes, If you don’t accumulate small steps, you can’t go as far as a thousand miles. In just one year, the new route from Shanghai to Liverpool has developed from a short-term, temporary arrangement to a long-term, fixed route. Your success story confirms the potential and resilience of China-UK trade cooperation,” Zheng Zeguang said.

The China Express direct shipping service has reduced transit time between the two cities to less than 30 days, thanks to a reduced number of stops and port delays.

Launched in May 2021, the route has helped mitigate supply chain disruptions caused by the pandemic, allowing Chinese goods to flow into the UK.

Now, an expansion of the service is expected with additional vessels to link more ports in China with Liverpool.

Clare Louise CarragherMayor of Sefton a northern borough of Liverpool, said she was encouraged to hear the project is growing.

“I spoke to the manager of the All Seas Global Logistics company, and he said that they are now hiring 100 more employees. The China UK Express has been creating jobs and promoting technical exchanges which are of great interest of local economic development. That’s exactly what we need to bring stock to stores and companies in the UK so that business can continue because we’ve really struggled to get goods during the lockdown.”

China has been the UK’s main source of imported goods for nearly two years seven quarters in a row. Liverpool plays a key role in promoting China-UK trade, offering easy access to the rest of the country. Liverpool and Shanghai even share a twinned-city relationship.

Claudio Veritiero, CEO of Peel Ports Group said trade levels were only increasing, so the Shanghai-Liverpool is likely to remain popular.

“China is one of the fastest growing markets around the world. Trade from China has more than doubled in the past 5 years to $1bn a year. From our perspective, we are very eager to bring in more products from China through the port of Liverpool to meet the needs of manufacturers and suppliers.”

This year marks the 50th anniversary of the establishment of diplomatic ties between China and the UK. And with more and more Chinese freight entering the country throughLiverpool, trade ties look set to become stronger than ever.

Is your employee impaired? Here’s the revolutionary way to find