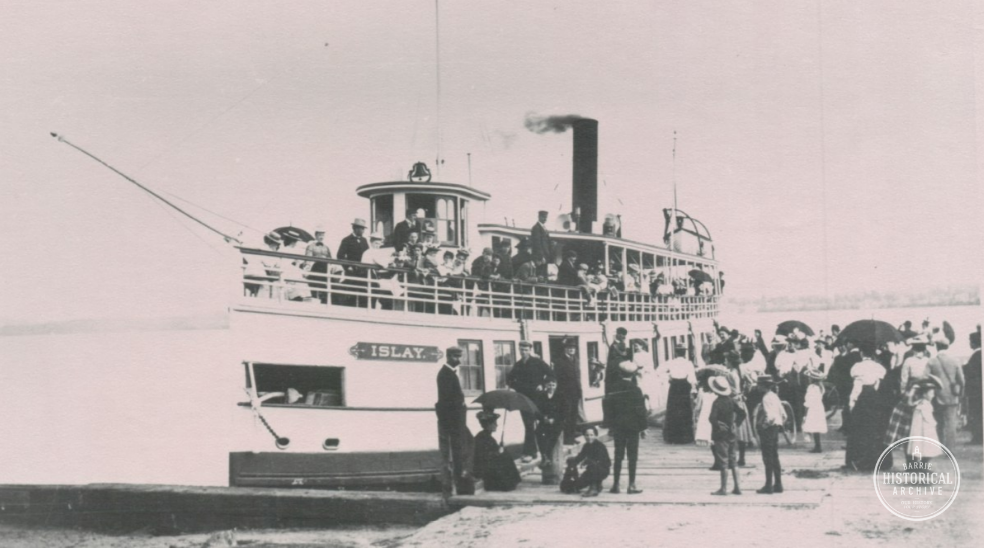 When decent roads were next to nonexistent, people and goods were transported across land and water, often changing modes of transportation several times before reaching a final destination.

In the halcyon days of steam shipping, in the latter part of the 19th century, Lake Simcoe was the Highway 400 of its time. Multiple steamers crisscrossed the lake bringing supplies, taking away farm produce and lumber, and conveying settlers.

Capt. Charles McInnes, commander of the steamer Orillia, which he later rechristened Islay, was just one of the bold men who made his life on the water. The captain, the son of a boat builder, was born in Glasgow, Scotland, in 1839.

McInnes and his father came to Canada in 1854. Before taking up their farmland near Mount Forest, they stopped at Oro Township to see some relatives. A year later, young Charles was back in the area and signed up to be a sailor on the schooner Queen.

He spent the next few years on the Great Lakes and reportedly made unusually quick progress from sailor to mate and to captain. Twice he was shipwrecked and was once found floating on a trunk near the sunken vessel.

In 1875, he left shipping to run a lumber mill at Orillia. McInnes sold the mill and headed to Port Arthur, where he took a government contract to bring immigrants overland by horse and wagon, along the Dawson Trail, to just outside Winnipeg.

The government contract paid a hefty bonus at its three-year completion and, with it, McInnes went to Buffalo, N.Y., and purchased the steamer Plymouth. His next vessel was the Oneida, which he ran from Collingwood to Chicago, and later from Chicago to Ogdensburg, N.Y.

The Oneida hit a rock and was beached near Clayton, N.Y. After that, McInnes returned to Orillia once more and had the Orillia built with the insurance money from the Oneida wreck.

McInnes bought Strawberry Island and turned it into a handsome summer resort. Of course, only his steamer had permission to dock there. The island boasted a pavilion, cookhouse, ice house, playground, camping facilities, boat rentals, fishing tackle and “the best bass fishing grounds in the lake.”

As steamer captains go, McInnes was known as an exceptionally cautious one. His slow and careful docking procedure often annoyed impatient travellers. However, his prudence didn’t eliminate the risk of mishaps completely.

In August 1912, the Islay left Orillia one evening with 200 passengers, including the Citizens Band, aboard ship. As they arrived at Strawberry Island, where the band and other passengers were to exit, they ran into trouble.

On a recent windy day, the Islay had damaged the island wharf so that small scows were necessary to ferry the passengers from the steamer to the island that night. Mayhem ensued when some of the small boats became overloaded and sank. Female passengers threw themselves around the necks of the band members, it was reported, screaming, “Save me!” The water was less than four feet deep.

That wasn’t the worst of it. After the evening’s musical enjoyment, the crowd left the island again and was in a jovial mood despite the earlier exploits.

With a blast of the ship’s whistle, McInnes alerted the bridgemen at the Narrows and they opened the bridge to allow the Islay to pass into Lake Couchiching. A little farther on, the same procedure was used at the CPR bridge, except the result was very different.

“My God, the bridge’s not open!” shouted McInnes as he ordered a reversal of the engines.

The result was that the Islay crashed into the bridge, crumpling the upper deck into splinters for 20 feet back.

Amazingly, no one was killed.

In a scene right out of the movie Titanic, women screamed, everyone donned life-jackets and jumped into the water in the darkness. Fortunately, the water was three feet deep.

The band played the most cheerful tunes in its repertoire and marched the group back into town.

Mary Harris provided this column on behalf of the Barrie Historical Archive.