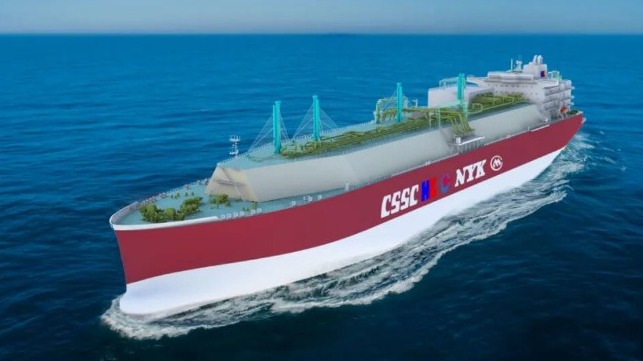 China has booked its largest order to date for LNG carriers as the country moves to become the world’s largest importer of liquified natural gas. Following on from its large contracts to purchase U.S. LNG, China National Offshore Oil Corp (CNOOC) has entered into a total of 12 newbuild contracts since the beginning of 2022 valued at nearly $2.5 billion, which will more than double the company’s fleet of gas carriers.

The new order signed today involves a three-way partnership between CNOOC which will be the charterer for the six new vessels that were ordered by Japan’s NYK and involves China Merchants Group. NYK ordered six 170,000 cubic meter gas carriers to be built by CSSC Hudong-Zhonghua Shipbuilding. The order is being valued at $1.26 billion making it the largest yet in China for LNG carriers.

The order is in addition to six LNG carriers ordered by CNOOC in January 2022 to be built at the same shipyard. The twelve vessels, due for delivery between 2024 and 2027, will increase the company’s current fleet of 10 LNG carriers as they seek to become China’s largest LNG importer and the second largest in the world. They reported that they will be able to import 108 million cubic meters of natural gas, which can supply the residents of Beijing for about 16 days.

CNOOC’s overall LNG imports are reaching nearly 79 million tons accounting for about two-thirds of China’s annual natural gas imports. The expansion of the LNG fleet is part of the company’s active promotion of green development projects. They are working to accelerate the business development of the entire LNG industry chain, enhancing natural gas production, supply, storage, and sales capabilities.

Designed by Hudong-Zhonghua, the new vessels will be 980 feet in length with a 152-foot beam. They will be outfitted with the newest designs of dual-fuel engines to operate at a speed of 19.5 knots while also reducing fuel consumption. They will also be equipped with GTT’s latest super containment system.

China State Shipbuilding Corporation is also highlighting that with this order it has booked a record total of 17 new LNG carrier contracts since the start of 2022. In addition to the 12 vessels between the two orders from CNOOC, Japan’s Mitsui O.S.K Lines ordered four large LNG carriers that will be chartered to QatarEnergy as part of Qatar’s planned expansion of its LNG production.