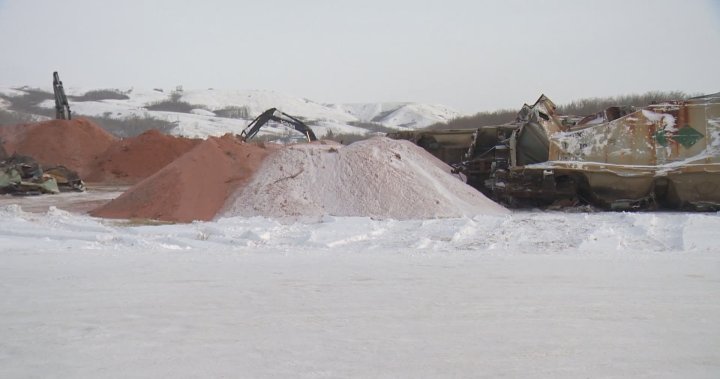 Highway 20 remains closed in the area.

Emergency crews rushed to the scene in extreme cold weather conditions to find railcars crushed on top of one another along the tracks.  They have continued to work through abysmally frigid temperatures overnight and into Wednesday morning.

Witnesses, including members of the Lumsden Fire Department and the Village of Craven, posted videos to their social media pages showing about a dozen CP train cars piled on top of each other against the darkness of night.

Maria Fuller was travelling home with her sisters from Regina to Earl Grey when they saw vehicles making U-turns near the train tracks.

Once they came across the wreckage, they called 9-1-1 and stopped to take a few pictures before backtracking along the dark — and in some sections, slick — highway toward Regina.

In her Facebook video, Fuller describes the scene of the derailment and says, “It looks like the train cars are piled 40 feet in the air.”  She later said, “I think another really interesting thing was the way that the cars were stacked.  It looked a lot like an old car lot with a lot of lined up cars, but just stacked, and it was this crazy, unbelievable site.”

Anyone, like Fuller and her sisters, travelling along Highway 20, were forced them to make alternate travel plans.  A detour away from highway 20 to 6 then to Highway 99 added about 45 minutes to their drive.

Craven’s mayor and volunteer fire fighter, Scott Montgomery, lives on a hill overlooking the village.  He says, “it was about 9:30 at night. I just heard a really loud screeching sound, and I got up and looked out the window through my binoculars and saw that the cars had more or less crumpled up just like a train toy set. I immediately called 9-1-1.”

Montgomery says emergency crews were on scene within 10 minutes. The Village of Craven had a truck out within 30 minutes where Montgomery bundled up to help stop and redirect traffic away from the derailment, preventing commuters from getting stuck behind the closure.

In an email sent to Global News, Canadian Pacific Railway confirmed the freight train was carrying potash when it derailed just before 10pm Tuesday night.

CP immediately dispatched crews and resources who continue to clean up the crash site.

The cause of the derailment is under investigation. There were no reports of any injures, and there is no concerns over the public’s safety.

Highway 20 has been closed since the incident last Tuesday night, and crews hope to have it re-opened sometime Wednesday evening.

The Evolving Warehouse: Prepare Your Warehouse for Disruption