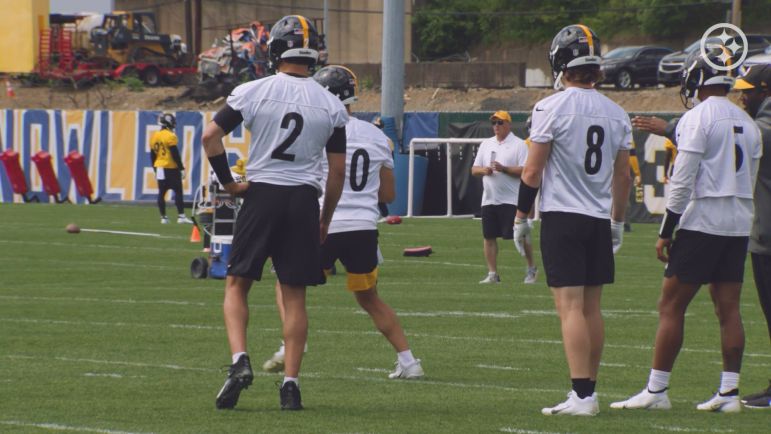 Although the timing might not necessarily have been anticipated, nobody was in the least bit surprised when the Pittsburgh Steelers announced the release of rookie seventh-round quarterback Chris Oladokun. And that was the problem with the pick to begin with. Not that he didn’t make the team, but that he was always not going to make the team.

The announcement sparked debate, and grandstanding, both among fans and professional and amateur commentators alike, about whether or not it even mattered. Yes, Oladokun was only a seventh-round draft pick, the 241st overall selection, and it’s not overly likely that you’re going to get a superstar there.

They signed veteran quarterback Mitch Trubisky as an unrestricted free agent, and then they drafted Kenny Pickett in the first round. Ben Roethlisberger and his day and a half off of practice per week are not here anymore. There is no conceivable way that head coach Mike Tomlin didn’t realize that there would be almost no reps left over for Oladokun.

And in fact, there weren’t, at least not until the very tail end of training camp, when he got something like four team reps. What made the decision to use a draft pick on Oladokun is the fact that they were never going to have the opportunity to even take a serious look at him, not that he had a slim chance of making the team.

If this were a year ago, and Roethlisberger were still here, entrenched as the starter and taking a full day off and then half a day off, we would be having a different discussion. Fourth quarterbacks got work in that environment. That’s how Devlin Hodges planted the seeds to become a minor folk hero. The conditions for that don’t exist in a three-way quarterback competition.

We can debate the average value of a late seventh-round draft pick. Generally, it’s going to be minimal. But why waste it—and you are wasting it when you use it on a player who will not be seriously looked at and then promptly released—without even giving yourself a chance to find talent?

It’s not just Tre Norwood. Tomlin’s late-round draft record has admittedly grown spotty in recent years, but it’s not as though they haven’t found significant contributors in the past like Tyler Matakevich, Anthony Chickillo, L.T. Walton, and players like Vince Williams and Antonio Brown on top of that. And that’s not even touching players signed as rookie free agents after the draft.

The Steelers presumably felt pressured to draft Oladokun, desiring a fourth arm for training camp, because they feared they would lose out on bidding for him as a free agent due to their low signing bonus offers.

But when that fourth arm is just going to be used to hand out water to the other quarterbacks when they get thirsty, that’s when the selection becomes a foolish one. It doesn’t even matter how significant the loss of a seventh-round pick is in and of itself.

Yes, maybe he ends up on the practice squad and five years from now becomes a superstar quarterback. But finding a decent player in the seventh round who will actually play, or at least participate in team drills during practice, is far more likely than that happening.