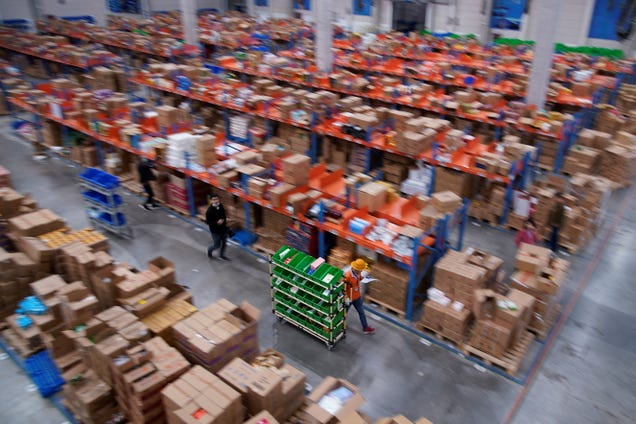 Earlier this month, TikTok began advertising jobs for its foray into building a logistics and warehousing network in the US. The jobs included roles at global fulfillment centers in Seattle and Los Angeles, intended to feed the social media platform’s e-commerce ventures.

But TikTok, China’s first truly global app, is only one part of the story. Beijing is pushing to transform China into a “logistics superpower” (link in Chinese), and tapping private firms like TikTok to help it achieve that ambition.

As Chinese e-commerce and tech giants muscle into the distribution and delivery space, they’re laying the groundwork of what could be a sea change in the global logistics industry. In addition to TikTok, Chinese fast-fashion retailer Shein also plans to build fulfillment and distribution centers in the US.

All this is happening against the backdrop of two related trends. Global trade disruptions caused by the pandemic have brought about a reckoning over the importance of resilient supply chains and robust logistics networks.

Meanwhile, the US and its allies have intensified efforts to reduce reliance on China for commodities and technologies. The dynamic is also playing out in the reverse: Beijing’s stated national strategy is to minimize dependence on foreign countries while maximizing global dependence on China.

Logistics is the latest arena where China is applying that strategy. And it’s a tried-and-tested one: identify an existing industry ripe for disruption from an emergent technology, then master that new technology to leapfrog legacy players, and “overtake on the bend,” as Beijing calls it. This playbook has helped China dominate electric vehicles and batteries, for example, despite not previously being an automotive powerhouse.

“Logistics is very plug and play. Once you have drones, robots, and software, it’s just plug it in and turnkey. It deploys very easily,” said Jeffrey Towson, a digital strategies analyst and a business professor at the China Europe International Business School. “I expect a couple Chinese companies to be the global leaders of this stuff.”

At its core, logistics is about moving goods from A to B. But that simple act, at scale, becomes the lifeblood of any country. China, like the US, views logistics as a strategically important industry underpinning the efficiency and competitiveness of its economy.

Beijing wants to take that a step further by building what it calls a “modern circulation system” that integrates flows of commerce, finance, transportation, and commodities.

For financial flows, that includes the digital yuan and China’s alternative to Swift, the global payments network. For flows of commerce and commodities, Beijing has laid out a vision (link in Chinese) of a global logistics network shaped by China. Not only could that promise lower costs and greater control over the transport of imports and exports, it could give China heightened visibility and influence over global trade flows—think shipping information, routing and destinations, real-time tracking and schedule data, and even confidential business data.

One metric of progress is China’s total logistics expenditure as a share of its gross domestic product. Beijing often cites its comparatively higher logistics costs as a reason to upgrade its logistics industry.

One area where China has made significant progress in recent years is the number of overseas warehouses it operates via exporters or cross-border e-commerce firms with operations in international markets. These now number over 2,000, up from less than 100 in 2015, according to Chinese government figures. A global network of China-operated warehouses would reduce delivery costs and increase delivery speeds, and “become a new station for ‘Made in China’ to ‘go out’,” as state media outlet People’s Daily has put it (link in Chinese).

Besides physical infrastructure like warehouses, China wants to cultivate a number of homegrown and globally competitive logistics firms. That aspiration hasn’t fully materialized, yet.

While China is a dominant player in global shipping, maritime transport is only one aspect of a comprehensive logistics network. Other components include international storage, distribution, and express delivery networks, as well as a logistics data platform.

“Chinese exports already cover over 220 countries and regions, but it still does not have logistics enterprises with global delivery capabilities, [like] UPS, FedEx, DHL and other such international courier giants,” wrote Wei Jigang, who studies industrial economics at the research arm of China’s state council, in his 2017 book “Towards a Logistics Superpower” (link in Chinese).

That may now be changing.

One formidable emerging player is Cainiao, Alibaba’s logistics arm, which Chinese analysts have compared to both Amazon and Flexport, the tech-enabled freight forwarder and shipping broker.

Cainiao began in 2013 focusing mostly on software, providing a logistics information platform connecting the delivery capacities of its numerous logistics partners, including FedEx and UPS.

But Cainiao has increasingly invested in physical infrastructure, building a network of warehouses, distribution centers, pickup and drop-off stations, and integrated logistics hubs, including one in Belgium and another in Malaysia. All of it is underlaid and supported by Cainiao’s proprietary software and automated systems. 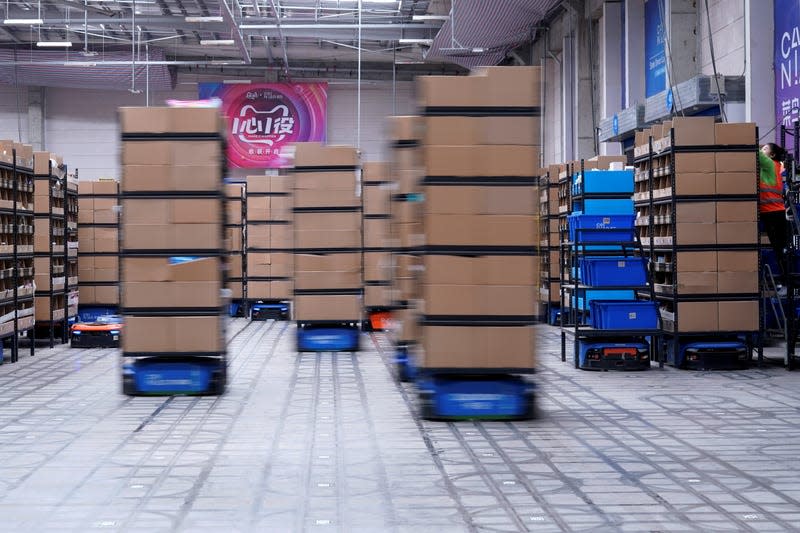 Automated robots moves product in a Cainiao warehouse in China.

That strategy appears to be paying off. According to company data, Cainiao delivered a daily average of 4.5 million cross-border and international packages in FY2022—a number that puts it in direct competition with legacy logistics giants like FedEx and UPS.

While Cainiao doesn’t itself physically deliver the bulk of these packages, it is the “main point of contact” and has “full visibility” over the parcel flow, according to a company spokesperson. But it may not matter so much what fraction, if any, of those 4.5 million packages Cainiao delivers by itself.

“When you move from a dumb system, let’s call it, to a smart system, you can control things without owning things,” said Towson. “Alibaba has always said they’re asset light. Really what they’ve always been maniacal about is controlling the nervous system”—that is, data and analytics.

One example of one such logistical “nervous system” that has already caught the attention of US officials is the Chinese state-sponsored cargo data network, Logink.

In a report published last month, a US congressional advisory body noted that widespread adoption of Logink could “give China’s government access to sensitive data, including commercial transport of US military cargo, insight into supply chain vulnerabilities, and critical market information,” potentially giving China an unfair advantage in the global logistics industry.

Meanwhile, TikTok, which has already disrupted short-form videos and influencer marketing, could spur changes in the logistics market.

As Axios reported earlier this month, TikTok plans to build an “international e-commerce fulfillment system” that includes warehouses and product fulfillment centers in the US to speed up deliveries of merchandise from China—anything from quartz crystals to cosmetics—to American consumers and make product returns easier.

“Chinese players have the opportunity to really upgrade their customer experience, and they will become way more competitive versus domestic [US] players,” said Rui Ma, a tech analyst and investor.

For TikTok, that would mean more sales and revenue. For the Chinese government, the overseas success of an e-commerce firm like TikTok is also a vector through which it can pursue its global logistics ambitions.

In its latest five-year plan on e-commerce development (link in Chinese) published in November 2021, for example, the Chinese ministry of commerce notes that “by going abroad, e-commerce enterprises have sped up the global development of logistics, mobile payments, and other fields.”

How China could weaponize its global logistics network

All of which prompts the inevitable questions about economic security, especially as the US and its allies increasingly feel the need to reduce dependencies on authoritarian countries like China and Russia.

To have Chinese companies and state players expand their influence over global logistics could add another dimension to the kind of dependency that Washington is trying to minimize.

TikTok’s incipient logistics operation, by itself, may not pose national security threats to the US (though Washington already believes the app’s US user data could help Beijing spy on Americans, a claim the company denies). Nor, for that matter, may Cainiao’s. But the Chinese government has sweeping powers enabling it to demand widespread access to private companies’ data. Once aggregated at scale, that kind of information can give China insight into—and potentially control over—global trade.

The US congressional report illustrates some ways this could happen. For example, real-time export and shipping data could detect an uptick in exports by a non-Chinese vendor; using that information, Chinese companies could undercut foreign competitors and win market share with an unfair non-market advantage.

Commercial players could potentially complement state-led efforts like Logink, said Isaac. B. Kardon, an assistant professor at the US Naval War College, who studies the security implications of China’s global network of port terminals.

This is a particular concern because China has already proven itself ready and willing to weaponize trade for political ends. China blocked Norweigian salmon imports after the Oslo-based Nobel Prize committee awarded the Chinese human rights activist Liu Xiaobo the Peace Prize; boycotted Australian coal after Canberra called for an investigation into the origins of covid; and effectively banned Lithuanian exports after the Baltic country showed support for Taiwan.

A vast China-operated global logistics network essentially sharpens Beijing’s existing tools of economic warfare, giving Beijing a “menu of options” on economic coercion, said Kardon. “What this does is it gives them a much wider range of instruments to tailor their responses.”

The Evolving Warehouse: Prepare Your Warehouse for Disruption