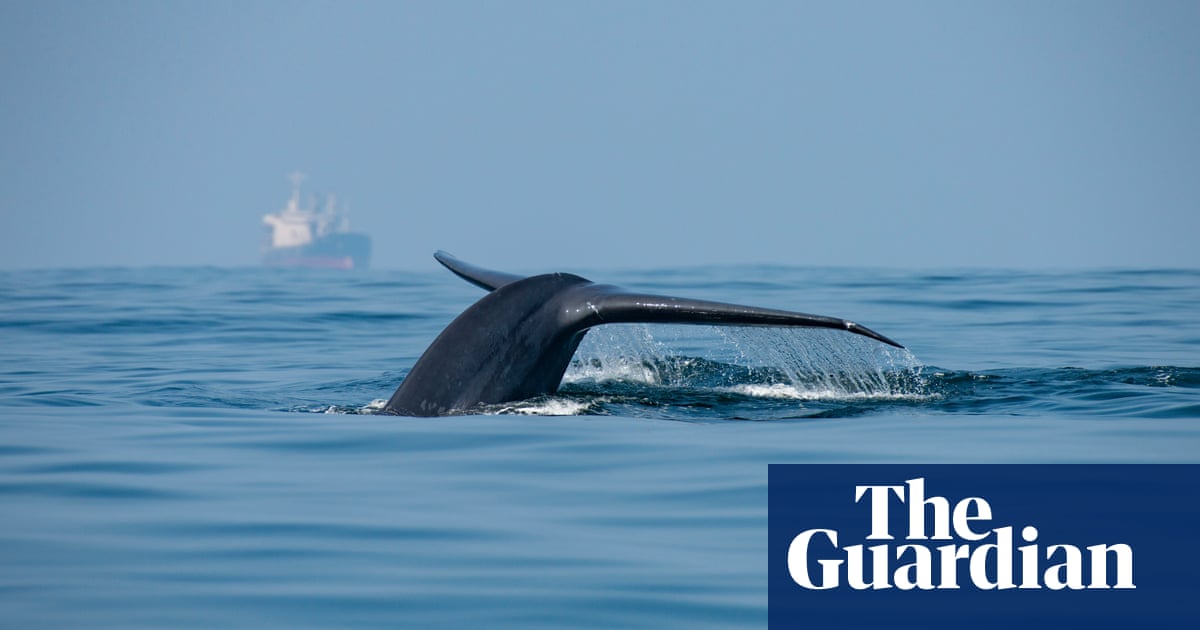 Scientists and conservation groups are calling for one of the world’s busiest shipping lanes to be rerouted in an effort to protect the world’s largest animal.

Since 2008,researchers have been painstakingly piecing together clues about a little-known, endangered population of blue whales that live off the southern tip of Sri Lanka. What they have discovered so far hints at one group of cetaceans or even a sub-species. Rather than migrating vast distances like most blue whales, the Sri Lankan population is thought to live in the region year-round, grazing on tiny shrimps and communicating via distinctive vocalisations.

What has also become clear is the immense threat they face. The whales’ habitat overlaps with a major shipping artery that connects east Asia to the Suez Canal, leaving them vulnerable to ship strikes and noise pollution.

On an average day the whales face off against a relentless barrage of about 200 ships, many of them container ships or oil tankers that stretch up to 300 metres in length.

“The problem for these whales is that they live in a giant obstacle course that we have created,” said Asha de Vos, a marine biologist who launched the first long-term study of the region’s whales in 2008.

It is a clash playing out in increasing intensity around the world. Between 1992 and 2013, the shipping traffic swelled 300%, as maritime transport became a fixture in roughly 90% of world trade.

In Sri Lanka, the push is now on to tackle what De Vos describes as a “uniquely resolvable issue”, after research suggested that a small shift in the shipping lane could make a big difference to the whales. 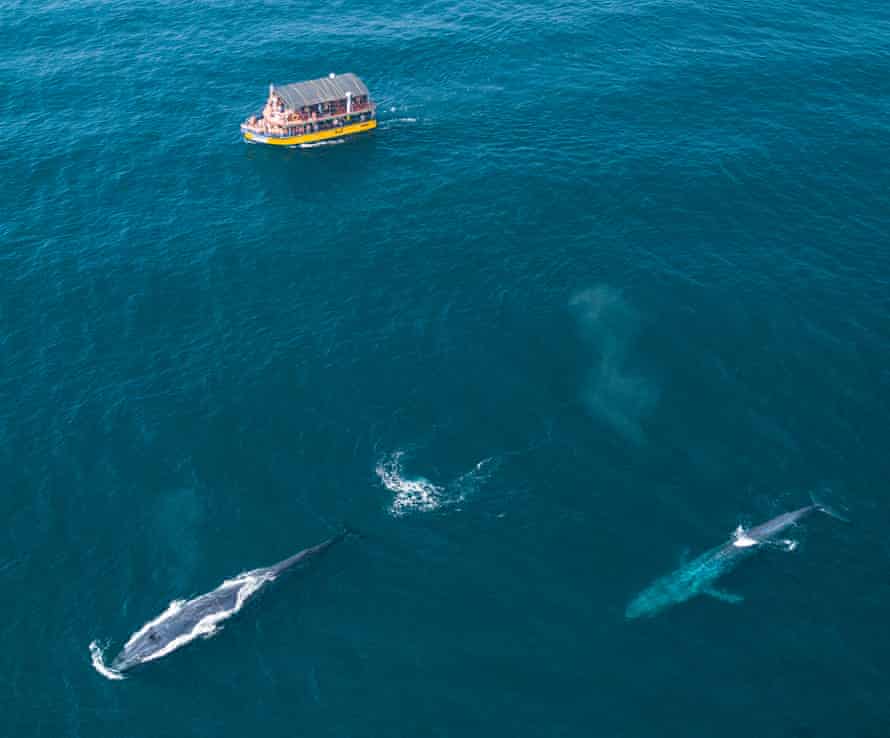 Whale-watching tourism is lucrative for Sri Lanka but even the small boats are at risk from the huge tankers and container ships that use the route. Photograph: IFAW/Christian Loader

Her longstanding push to move the shipping lane has been backed by a trio of international conservation groups, which have formally called on the Sri Lankan government to propose the route change to the International Maritime Organization.

“Studies indicate that if a shipping lane were to be established 15 nautical miles to the south of the current lane, the risk of collisions with blue whales would be reduced by 95%,” read the letter from the International Fund for Animal Welfare (IFAW), Great Whale Conservancy and OceanCare.

For ships travelling across the world, the 15-nautical mile shift was “insignificant”, said Sharon Livermore of IFAW. “This tiny little shift in the location of the shipping lane would make a huge difference to the conservation status of these whales.”

While there are no firm numbers on how many whales live in the area or how many have been killed by ships, in recent years several carcasses have turned up bearing signs of collision.

“The risk is so high that we know that there must be many more being killed than are being reported,” said Livermore. “The blue whale might be the largest animal on the planet – these ones are about 22 metres long – but they pale in significance against a 300-metre cargo ship.”

The rerouting would also benefit the country’s thriving whale-watching industry and small-scale fishing communities, whose boats have been spotted bobbing perilously close to mammoth vessels in the shipping lane.

“There isn’t opportunity for manoeuvre – the ships can’t suddenly change their course if they see a whale or a fishing boat in their path, so the only way to reduce the risk is to move those ships away from this critical area,” said Livermore.

Her organisation first approached the Sri Lankan government about moving the shipping lane in 2015, calling it a unique opportunity to protect blue whales, 90% of which were slaughtered by whalers in the 20th century.

Others have also made overtures. In 2017, the World Shipping Council, which represents most of the world’s shipping companies, urged the Sri Lankan government to consider the move, as did the International Whaling Commission in early 2021. 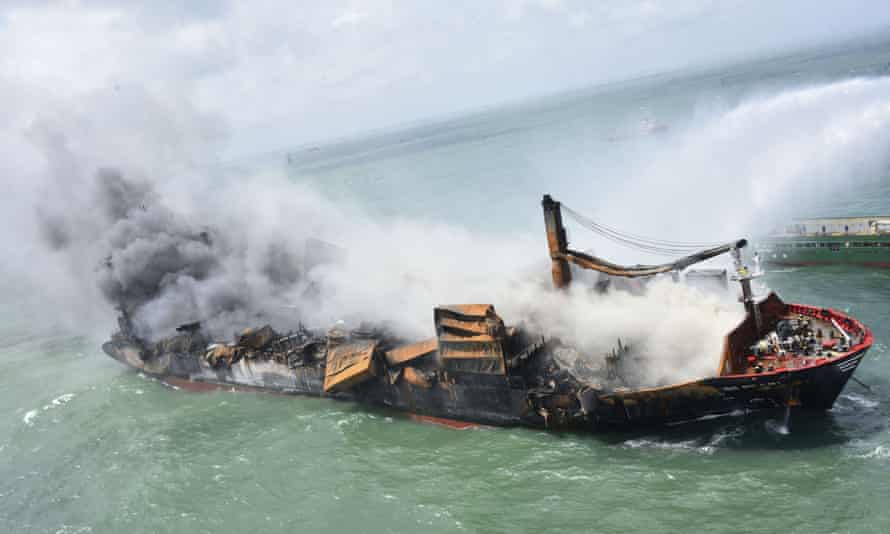 The stricken X-Press Pearl, which sank off the coast of Sri Lanka after a fire last May, releasing tonnes of plastic pellets, or ‘nurdles’. Photograph: AP

The previous Sri Lankan government refused to sign off on the proposals, citing concerns in 2019 about the economic impact of the move. The country’s Marine Environment Protection Authority did not respond to a request for comment.

The vast majority of the ships using the lane do not stop in Sri Lanka but only transit through the area, said De Vos, suggesting the economic cost of the move would be minimal. “None of us want the industry to stop using our waters or for the industry to collapse,” she added.

The heavy cost to Sri Lanka from shipping was made clear in May, after a cargo ship laden with toxic chemicals caught fire, dumping a hazardous mix of pollutants into the waters off Colombo. The spill poisoned the waters, left nearby beaches coated in plastic pellets and covered stretches of water in an oil slick, in what was described as the country’s worst-ever maritime disaster.

The tragedy struck a nerve with many people in Sri Lanka, said De Vos. Now she hoped the sentiment would extend to protecting the “unorthodox whales” that share the country’s waters.

“They’re so different to blue whales anywhere else in the world. It’s not just that it could be a separate subspecies, it has a different dialect, different feeding habits, different behaviours,” she said. “We could start losing a culture of whales.”